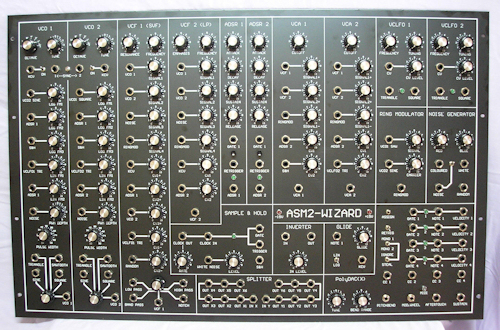 The ASM-2 is a project by Elby Designs from Australia. It is quite a big DIY synthesizer that you can build as a semi-modular or pre-wired version. I decided to go for the semi-modular version, since I will be able to hook it up to my Big Modular setup then as well. It also uses Big Jacks just like the modules I'm building myself. The ASM-2 has 2 VCO's that have Triangle, Saw, Square and Sine waves coming from them. It has two VCF's that are both a little bit different and there are two VCA's, two ADSRS, two LFO's and a Noise generator, Sample & Hold generator, Ring Modulator and a glide. So it is a complete synthesizer on it's own. 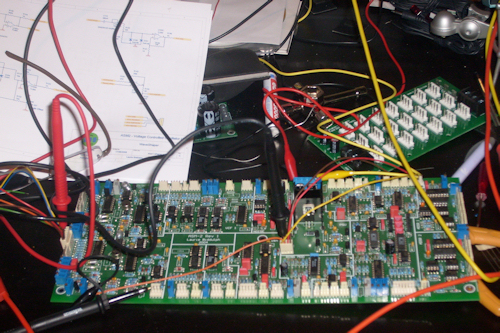 I already finished all the electronics for this project. In the picture on the right you can see the main PCB. This is not the only PCB by the way. The ASM-2 also has a Midi to CV interface build-in and that is a separate PCB and so if the Power Supply. You can see on the PCB that there are a lot of connectors on it. Those are all meant to connect to the front panel components like potmeters, switches and jacks. At the moment I'm testing and calibrating the different circuits on the PCB. The nice thing about it being modular is that you can test all the components separately. The semi-modular functionality you have to build yourself by pre-wiring certain outputs to inputs on the input jacks that will be disrupted when you insert a jack. For that there is a little switch inside the jacks. 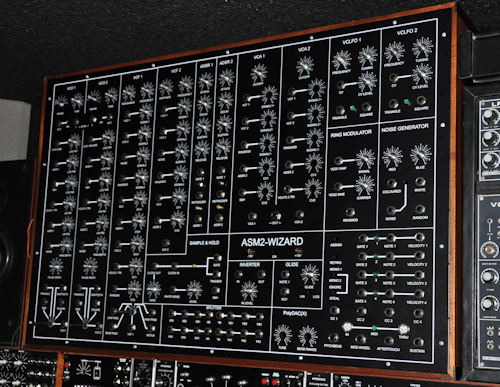 In the picture you can see how far I am with it now. Most of the front panel components are in place. I bought this front panel also from Elby Designs by the way. The wooden cabinet that you see was made by my furniture builder Gerrit Snijders. He made it from the same wood as my other furniture and it is exactly the same width as the modular cabinet. So it fits perfectly. The next big job is to put all the wiring in place from the PCB to the front panel components. But first I need to finish tuning the VCO's. And I also am missing some potmeters for the front panel that I need to source from somewhere.

You can read all about the construction so far on my blog: http://synthnl.blogspot.com/search/label/asm-2