When I was building the Wilba MB-6582 I bought some SID chips on E-bay. I finally found 8 of the older 6581 SID chips that I used for the MB-6582, but I also had found some newer 8520 chips. Then I saw that Wilba also created a newer and smaller Midibox based SID synthesizer called the SammichSID. It was sold as a complete kit, including display, all components and the case. Normally the case is black and the display and leds green, but during the assembly of the kits Wilba was short in black cases and asked if some people would be interested in a white case. I happen to love white synthesizers so I volunteered immediately. I did ask Wilba if he could put in a blue and white display then and blue leds in the kit. And so it happened.

When my friend Hans heard that I was going to build one of these kits he asked my if I would build one for him as well, so eventually I build two of these kits. The whole kit consists of two PCB's just like its bigger brother. In the picture on the left you can see the main PCB with the SID's on there. As you can see there are just 2 SID's on there in stead of 8. So this is basicly 1/4 MB-6582 with a lot less controllers on the front panel. The sounds is the same though. There are some tricky parts in the construction of this kit so I would not recommend it for a beginner. But while I am writing this Wilba announced that he releases the last 50 kits not (ever) so maybe you are too late anyway if you would like to build one. 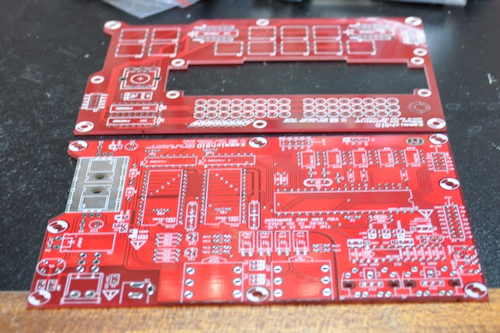 Here is another picture with both the PCB's. The lower PCB is the base PCB that you also see in the picture above. And the upper PCB is the front panel PCB that holds all the rotary encoders, knobs, leds and the display. I did find out when I had both kits ready that there is a big different in sounds between the newer and older SID's. Both have their unique strengths and I can't tell you which is better actually. If you are interested in reading about building these two SammichSID kits you can read more on the whole construction process on my Blog at this URL: http://synthnl.blogspot.com/search/label/sammichsid