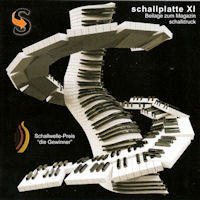 This is a sampler CD published by the German Electronics Music Club called Schallwende EV. They made a CD this year with all the winners and nominies for the Electronic Music price called SchallWelle that they organized last year. I was nominated in two categories, best newcomer and best CD. Unfortunately I didn't win either, but I'm still proud to be on this CD :)