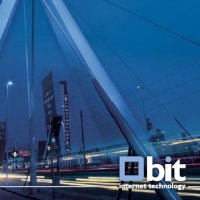 The first project I did was the background music for a promotional video for a Dutch business ISP called BIT BV. The assignment was to make a high tech futuristic sounding atmosphere to underline the companies high tech character. The movie was done by a company called Lukkien. They made 5 short movies of about one minute and one compiled version of 5 minutes. For the short version I made two tracks of one minute. BIT selected the second track I made, because of the higher tempo. I made a long version of this one and a third track based on the same tempo to use in the long version. We ended up alternating the two tracks there. The first track I made is still used as waiting music on the PBX.

There is just one track by me on this CD.The demo track  in the player is just a sample. The quality on the CD will be much better!