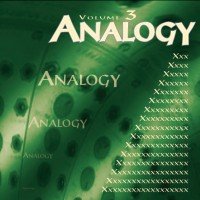 Analogy 3 is the third edition of an compilation album that is filled with analog synthesizer music from various artists. My track 'Synthology' was released on this album. All tracks are especially made for this album and so not released before. All tracks are mixed together as one piece. Analogy 3 was released the same date as my own AeroDynamics album. Analogy 3 is a project of Groove Unlimited. Look here for the other artists: http://www.groove.nl/cd/g/gr-142.html