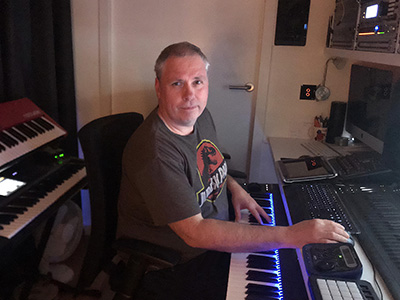 Now that BorkHavn is finished I started working on new music for my new solo albums. Yes multiple! The last 7 years I recorded quite some music, but never got to finishing it. So I'm slowly starting to open all these projects and begin working on those tracks. One of my solo projects is going to be about dinosaurs so hence the new name for my studio called the 'Jurassic' studio now and the accompanying Jurassic Park T-shirt. My Girlfriend Sonja took this picture for the upcoming Schallwelle sampler release, but I thought it was a nice idea to share it with you as well. I'm also working on the music I recorded a couple of years ago for two planetarium shows. That will be released in the future as well with some new tracks and I have another surprise album planned with old and new material. So lots to come. 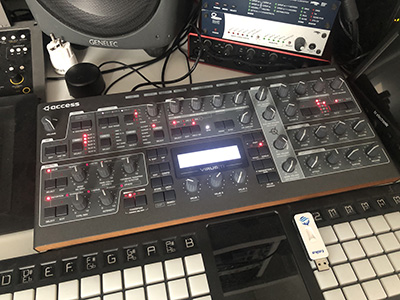 During the work on this new music I did encounter a problem though. It turned out I used a Virus TI polar as a plugin and didn't record this as audio because I thought I would never sell it. I only had the midi notes. But because of the divorce I did sell it :/ I had to find a solution for that. So the first new addition to the 'Jurassic Studio' is this used Access Virus TI2 desktop module. Fortunately I did backup the sounds I programmed for it so all projects I used it in are working again. Another nice thing to mention is that I did the artwork for two of these upcoming albums together with my youngest daughter Tamara van Osenbruggen. She is learning media design in school. I'm very proud of the outcome and will share it with you soon. I will try to put more updates online from now on about the progress of my ongoing projects. And do let me know if you have any questions for me. I'd be happy to answer them.