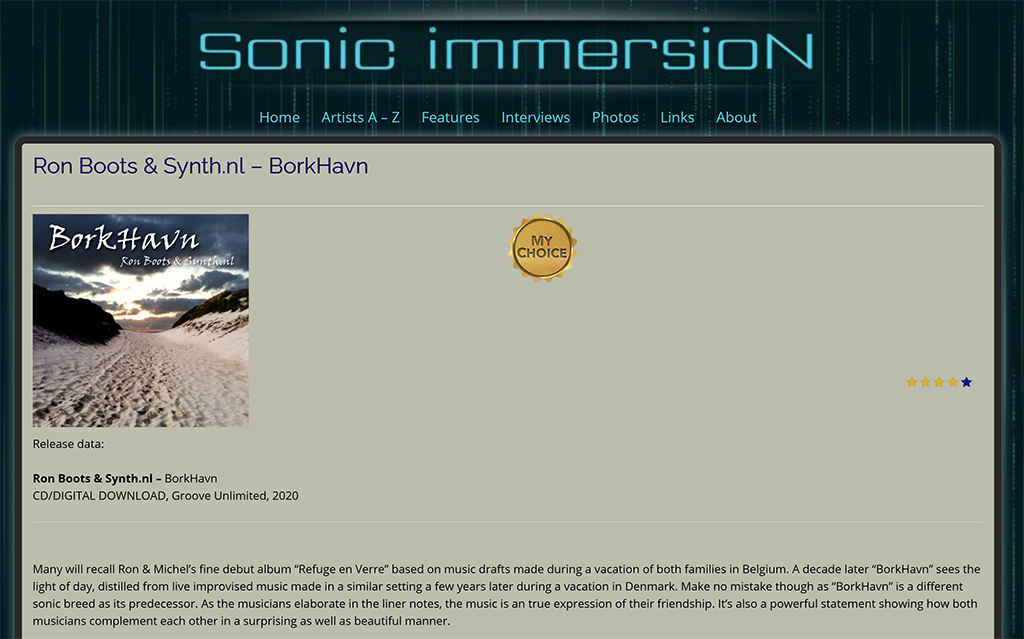 Another very nice review came in on the BorkHavn album I did together with Ron Boots. This time by Bert Strolenberg of Sonic Immersion. He gave our album 4 stars. Which is actually a lot since Bert very rarely gives our more and he put the 'My Choice' label on the review which mean he would buy the album himself. You can find the review on his website on this url: http://www.sonicimmersion.org/ron-boots-synthnl-borkhavn/. I also put the text of the review below (Press More). More information on the album here: https://www.synth.nl/music/collaborations/borkhavn

Many will recall Ron & Michel’s fine debut album “Refuge en Verre” based on music drafts made during a vacation of both families in Belgium. A decade later “BorkHavn” sees the light of day, distilled from live improvised music made in a similar setting a few years later during a vacation in Denmark. Make no mistake though as “BorkHavn” is a different sonic breed as its predecessor. As the musicians elaborate in the liner notes, the music is an true expression of their friendship. It’s also a powerful statement showing how both musicians complement each other in a surprising as well as beautiful manner.

The nine tracks feature emotive electronic music with a strong dynamic current connecting them. Many string pads and drums pass by on the outcome taking various twists and turns as its progresses. There’s the dynamic undercurrent sensed on the engaging opening title. Things take on an energizing orchestral/symphonic shape “Nordsøen”, entering psychedelic-infused and slightly experimental territory on “Gåpåmod”, firing off a powerful sequencer-lead on the jolly “Hjortebøf” while reflective sonic universes open up on “Stjernekiggeri” and “Torden”. Energy runs high on the freestyle yet groovy “Vindmøller” with a slice of “Acoustic Shadows” thrown in on the first half before the lush “Venskab” brings the album to a closure.

If you want an album with solid, attentively-made electronic music, “BorkHavn” should be your pick without hesitation.